Art as a positive narrative resource against violence.

Blog Art as a positive narrative re...

Comuna 13 in Medellin is surprising for its history of resilience and social transformation through art.

Medellin, one of Colombia's main cities, has transformed itself into a vibrant city after decades of violence. Over the last decade, the municipal administration, the private sector and community-based social organizations have played an active role in rebuilding the image of Medellin, which was once ravaged by war. Aiming to attract foreign investment and tourists, the city has sought to portray itself to the world as "innovative", "intelligent", "sustainable" and a "resilient city".

Solar-powered intra-urban escalators. Photograph by the Mayor's Office of Medellín

Comuna 13, one of the city's neighborhood clusters serves as a reference to understand the synergies made between different sectors that to set aside the stigma as one of the most violent cities in the world, to be ranked in 2013 as the most innovative city in the world. At the international level, Comuna 13 is perhaps one of the best known areas of Medellin. Most of its neighborhoods were built informally by people displaced during the second half of the 20th century, most of comuna 13 sprawls across the hills surrounding the city's western flank and was the last area controlled by urban militias before military and paramilitary operations drove them out in 2002. The paramilitary groups then controlled this disputed territory until their demobilization (2003-2006). The failure of the demobilization process led to the reconversion of many of these former combatants into common street gangs, which control territories ranging from a street or a square to an entire neighborhood.

Despite all this, the group of neighborhoods in the area known as Comuna 13 began to have some initiatives and artistic groups at the end of the 1990s, such as Casa Kolacho, the AgroArtes collective and others, which sought to promote youth entertainment scenarios based on hip hop music and art. From there, a whole graffiti movement began to germinate in the neighborhoods that, together with the efforts of the municipal administration, generated a set of actions for social transformation that today position this territory as an international benchmark of social resilience.

Santiago Uribe, former head of resilience of the municipal administration, said: "The idea is to replace a place based on a traumatic memory with a site oriented to education, art and culture". Many sites in Comuna 13 illustrate this process: changing the image of a site associated with violent memories for modern constructions or murals that maintain the memory of the past that one seeks to overcome. 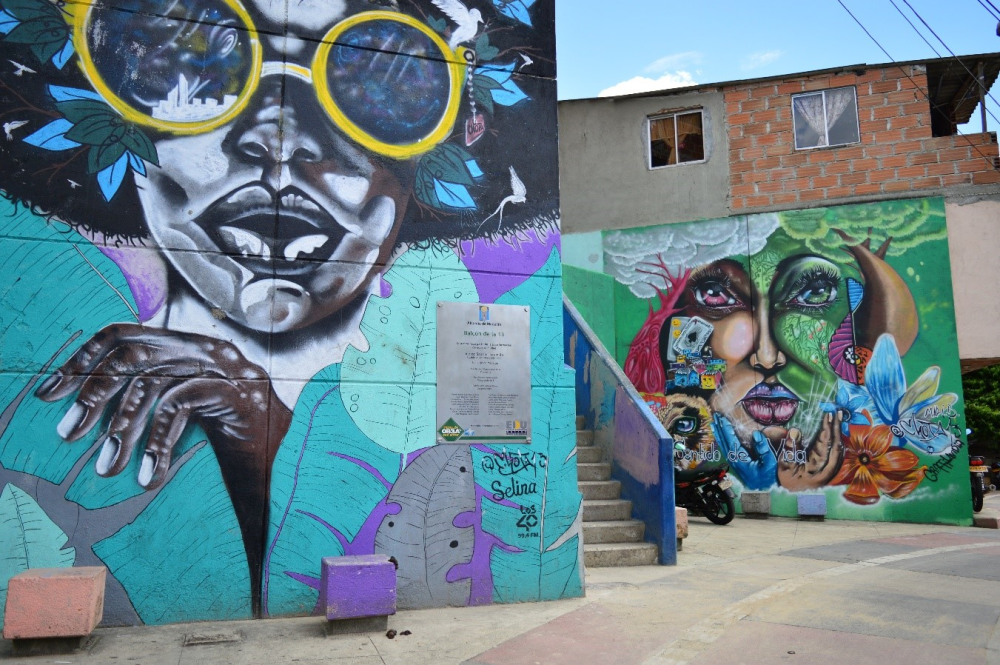 For this reason, Comuna 13 is nowadays art in its maximum expression. It is possible to recognize a great socio-spatial change in the streets of this community. The new generations have rebuilt the territory by promoting art instead of violence. The streets of the community became one of the most important open-air urban art galleries in the country and each graffiti has its own story, since most of the artistic expressions are inspired by the past of the community and promote messages of peace and hope. Through graffiti, the community was able to develop a strong sense of belonging to the sector and show themselves to the world in a different way, as people caught in the middle of an armed conflict, but with the willingness to move forward.

Local commerce promoted by tourism and mural that starts the guided tour for tourists. Photograph by the Mayor's Office of Medellín

The transformation of this sector has brought not only spatial changes for residents, but also economic ones. Tourism and commerce have flourished in these streets, leaving in their wake the livelihood of many residents, promoting dance shows, music, gastronomy and tour guides. Today, the Comuna is a source of pride and an example of social improvement. It is the symbol of Medellín's rebirth after its violent past.

Panoramic view of Comuna 13. Photograph by the Mayor's Office of Medellín

2. Resilience as a City Brand: The Cases of the Comuna 13 and Moravia in Medellin, Colombia

4. Comuna 13: The Transformation of a Broken Neighborhood.

Register for our self-paced course in "Building Positive Narratives" and start crafting your own, resilient reality: