Learn the information you need to be aware of the risks that young people and children are exposed to when using the Internet.

Colnodo, after working in different areas of Colombia, recognized the need to address mothers, fathers, and caregivers as one of its target populations since minors, that is, the children of this population are among the most vulnerable to violence and digital risks resulting in different affectations in their personal, family, school and social life.

Participating in projects related to other topics, people expressed their concern for not knowing how to accompany their sons and daughters, as they felt isolated or lagging due to their lack of technological knowledge and also for not knowing how to recognize and face the digital risks they hear about constantly.

A tool with a diffusion scope

This is why Colnodo has focused its efforts on carrying out a project that would address these needs, producing a series of 3 podcasts that would allow them to share comprehensive and complete information to parents about the possible risks that a child or young person may face in their daily use of the Internet. The versatility of the production, its low weight, which allows it to be disseminated by chat groups, and its practicality which allows listening while doing other activities, were some of the reasons why this format of dissemination was chosen.

At the beginning of the podcast, a case is presented to serve as an example and help to better understand the topics addressed. Each case remains open until the end so that, after listening to the rest of the content, people can think about the digital risks in the problem. As a second moment, there is a two-voice dialogue on the digital risks addressed in each program. For the first podcast, the topics of cyber dependency and challenges or dangerous trends were selected; in the second podcast, online games and cyberbullying are discussed; and finally, in the third podcast, communication in the family and digital attacks are discussed. To conclude, people are asked to think about what digital risks are present in the case raised from the beginning, once the risks are identified, the possible consequences and tips to prevent or act in situations like these are mentioned. 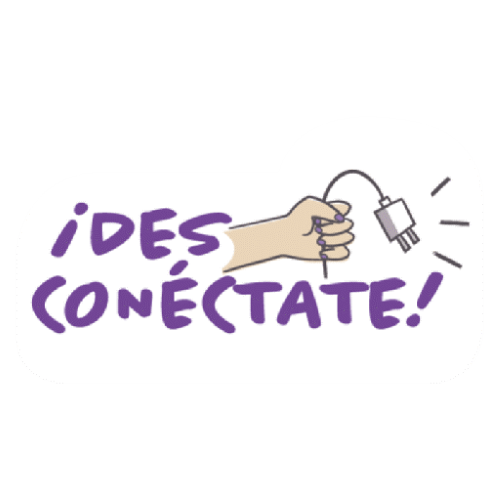 The young population uses digital media extensively to communicate, so Colnodo decided that stickers would be a good alternative to be used as an agile way to respond to messages on social networks Telegram and Whatsapp. So, a pack with six stickers was created, three that focus on images to convey a short and clear call to action and three others that focus on text to share information. These stickers can also be used as a moderation and interaction tool to share relevant information in group chats with other adults.

You can get the stickers in the following links:

The first part of the workshop consisted of making known the digital risks to which children and young people can be exposed when using technology without supervision or accompaniment. Once the risks were defined and explained, people were asked to listen to the problem situations raised in the podcasts and from these cases identify the risks that most concerned them, the most mentioned were the following: Phishing, grooming, cyber dependency, cyberbullying, sexting, vamping, dangerous trends and challenges, harassment, negative influences, and manipulation. When asked about the possible consequences of these risks, people mentioned: extortion, low academic level, attention deficit, depression, self-harm, low self-esteem, isolation and difficulty in socializing, suicide, death, sexual abuse, disappearance or kidnapping, and damage to the family group.

Regarding the best strategies to prevent these possible risks and their consequences, people identified the following as the best options: parental control, the definition of clear rules, discipline, assertive communication, constant accompaniment, continuous learning, verification and control of video game content, teaching about misleading information and verification of information and becoming more involved in the activities and tastes of children and young people.

After being clear about the risks, consequences, and strategic actions, dialogue activities were carried out where people could share their experiences, fears, and best family practices. From this activity emerged concerns associated with the use of technology as a means to entertain young people who remain alone at home, the permissiveness and complacency of some parents with technology, how to agree between couples to agree on clear limits and rules, sedentary lifestyles and lack of sleep associated with the use of technology, the language used by young people in games and social networks, aggressiveness and isolation, and how to get involved in digital activities and interests if parents do not know how to use technology.

In the dialogue between parents, proposals emerged such as participation in sports and academic clubs for young people who remain alone at home, the creation of support groups among parents, having schedules to lock up electronic devices to give priority to rest, further research on parental controls, creating spaces without technology to share family time, requesting more workshops to schools and that couples and children attend to reach agreements as a family and even the implementation of security cameras inside homes to have greater control of the activities of young people.

· The unknown concepts and names of digital risks.

· Opportunities and dangers in digital environments.

· Tools and practices to control the use of online games and social networks.

· Engaging more with games and other content that interests children,

· The importance of communication in the family.

· Recognizing areas for improvement as parents.

· Forms of control that are not too invasive or aggressive.

· The need for research on digital risks.

This project was carried out thanks to a minigrant from Atlantic Council within the "Best Practices in Exporting Expertise" project.