Have you ever found yourself trying to shape your communication strategy when the cause you’re pleading is surrounded by strong narratives dominating the public sphere with stories full of disinformation, propaganda, or even hatred?

It’s like playing chess with a demanding opponent: you have to pick the right strategy in order to win.

Read on to find out which strategies prove the most effective...

Basically, there are four main strategies you can use to counteract narratives you find malicious and support the cause you’re fighting for.

With factual counter-narratives we can point out flaws in the logic and credibility, as well as provide fact-checking.

For example, answering the statements being a part of a conspiracy theory, such as, e.g., those used in anti-vaccine campaigns, with ones containing a scientific proof, or using the voice of experts in a given field.

We can use moral counter-narratives if the message has an ethical or moral influence over the target audience.

For example, pointing out that violence towards other communities caused by propaganda goes against commonly shared religious principles.

Humor and sarcasm may be useful in de-legitimizing and undermining the narratives of extremists and extremist role models.

For example, when countering terrorist propaganda by showing the absurdity of extremist leaders’ reasoning or when talking about different forms of racism by pretending to support those harmful behaviors, like in this campaign.

Positive alternative narratives are based on positive foundations. They are not a response, but a proposal of something else, a pro-active dissemination. Presenting what we are FOR instead of AGAINST, of which a good example can be the Second Chances campaign in Florida, USA.

So, what is the Best Strategy?

You may ask yourself which of these narratives is the best strategy when competing with other narratives.

Positive alternative narratives are much more effective than the other three types of counter-narrative. By just countering disinformation messages with our messages, we repeat the opposing voices and give them the ‘proof’ that ‘the rest of us' are against them. Based on how the human brain works, we retain only some elements of any piece of information; so even if we repeat a bit of false information in order to negate it, or to debunk a myth, the fake data is repeated, and our brain can easily mingle facts and false ideas and even more: it can remember us as the source of this new piece of untrue information. So, you need to be very careful when using strategies that repeat the message of the opponents.

Therefore, the best solution is to create stand-alone, proactive, alternate narratives that bring about the constructive change.

Would you like to learn more about building positive narratives? Join our free online course! In less than an hour you will grasp the foundations of this approach and receive practical tools and ideas on how to support your cause with powerful stories! 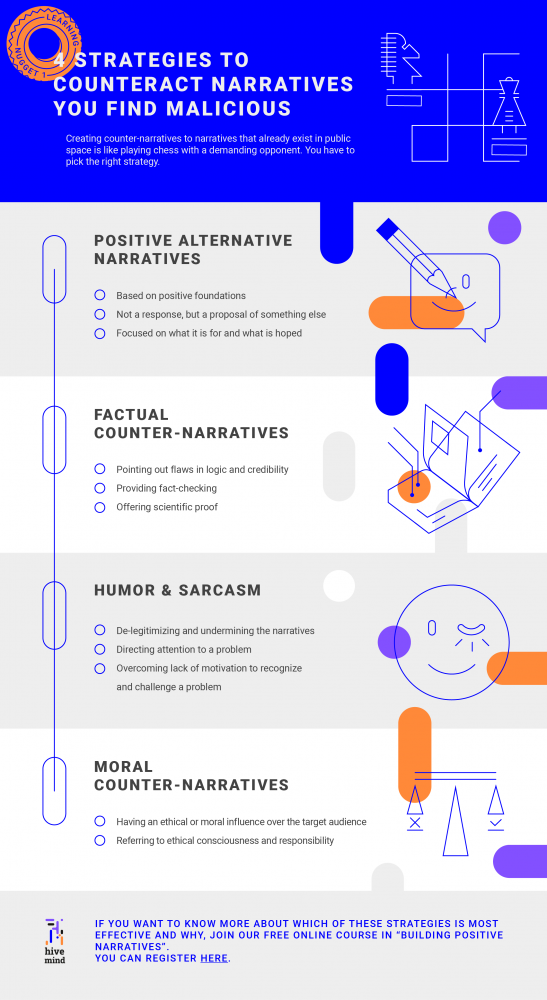