Blog 5 steps to reach your audience...

It’s only by learning what really counts for your audience and why it does, that you can really figure out what kind of communication will be in alignment with their needs and values.

In order to identify their behaviour, their beliefs behind it, or the emotional drivers, try out the Mapping Technique.

This technique is about creating a map which will help you to, firstly, draft different ways of how, by whom and why your target audience’s behaviour is being influenced, and then, to choose one of those ways that would be most closely aligned with your cause, around which you can effectively build your communication.

Ready? Let's draft a bull’s-eye map and begin our venture!

If you have any doubts about how to frame this question, check out this blog post which will lead you through it step by step.

We can now use, for example, the following target question: Why do teenage girls start drinking alcohol?

Once you’re ready with the question relevant to your cause, let’s deepen your analysis by populating the surrounding fields of the map with some sociological observations.

Start by thinking of people or things your micro target audience is influenced by in connection with the behaviour you analyse.

Who has influence on our target audience?

Include both positive and negative influencers and write them down on the map, each in a separate section.

To follow the example of teenage girls as the target audience, we can point to influencers, like: older siblings, peers, media, boys, etc.

What does your target audience think of practising the freely chosen behaviour, when under the influence of this specific group of people or a thing?

Add this information to the map in the section connected to the specific influencer.

Continuing with the previous example: I can finally feel relaxed. Drinking is cool and sexy. I forget about my inhibitions when I’m tipsy. I don’t want to stand out from the group that my older siblings are a part of. I want to belong.

The final step is to find the emotions that drive your audience. Try to figure out what purpose the chosen behaviour is serving them. What do they get out of behaving this way?

How does your target audience feel about practising the freely chosen behaviour in the context of a specific influencer?

What does it tell you about your target audience's values? What seems to be most important for them?

Note it down; it will give you some helpful guidance on values you can tap into when shaping your narrative.

For example, when getting tipsy in the company of their older siblings’ friends, teenage girls can feel more mature and accepted, equal to those whom they admire. In case of this target audience, one of the values, that is immediately visible as dominating, is a sense of belonging.

When your Target Audience Map is populated, it’s time to choose the slice on which you know you can have the most realistic impact. Based on this slice, you can formulate the Target Audience Statement.

For example, our target audience statement would be:

Some teenage girls believe drinking alcohol can prove their equality to older siblings’ friends, as it makes them seem more mature and cool, and therefore they feel accepted.

Once you have your target audience statement, you are ready to further shape your communication.

Use this statement as a base for filling your narrative with persuasion, so that you can show your target audience alternative positive ways to fulfill their needs and tap into their values. 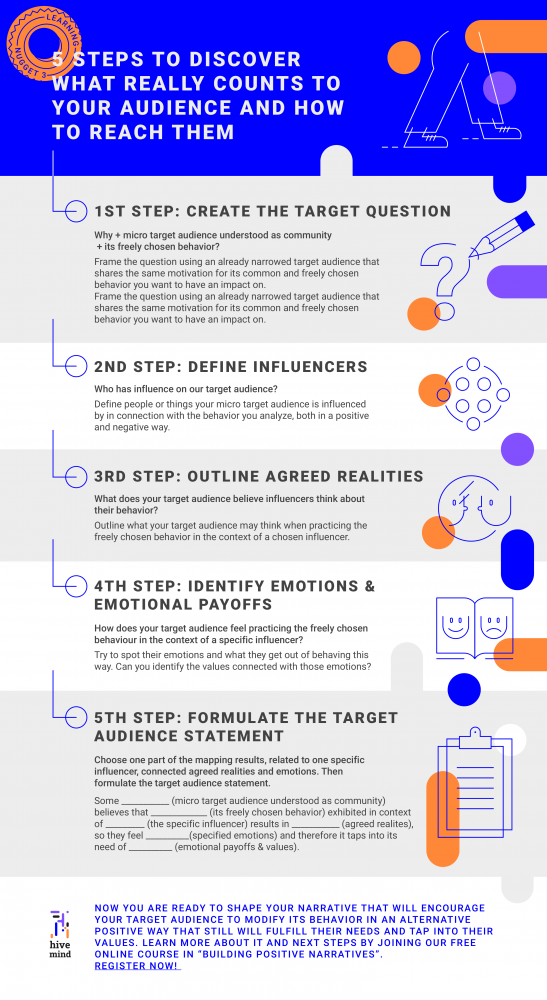