Disinformation, Information Warfare on Several Fronts, and the Role of the Journalist

In today's digital world, information warfare is significantly more pronounced. The war in Ukraine is also taking place on several fronts of the information world, in front of video games, TikTok, and that of fact-checkers. Therefore, the focus of journalists should be on news sources, in controlling them to avoid the possibility of fraud from manipulated information.

The start of the war in Ukraine has produced a new wave of disinformation. The new reality created in the Ukrainian state is constantly reflected in the media, but this picture often reflects a manipulated reality, especially on social media. This disinformation has created a fog over what is happening in Ukraine and, various cases show that citizens in different parts of the world have fallen and are falling prey to manipulation and, have unknowingly become and are becoming part of this manipulation, enabling disinformation even greater distribution. All this, in today's dynamics of information circulation, restores at the center of the discussion the necessity for citizens to verify any information they receive, ie to develop a sense of verification as if they were journalists.

After Brexit, the 2016 presidential election in the United States of America and COVID-19, the phenomenon of disinformation is once again endangering the whole world, now with the war in Ukraine. This wave of misinformation related to the situation in Ukraine has in a short time put different tactics of manipulation. Unlike previous disinformation, whether about the US election or the pandemic, video games are now being used to manipulate. A video claiming to contain footage of the war in Ukraine has been viewed thousands of times on Facebook and YouTube. In fact, the footage was taken from a video game called “ARMA 3”. These images were also published by a television channel in Romania, which adds to the suspicion and creates even greater confusion over the information and images.

Disinformation about the war in Ukraine has also erupted on TikTok, which has not been so pronounced before, with the disinformation circulating about the pandemic. On TikTok, videos with manipulated content have been viewed over 30 million times, or videos allegedly from a Ukrainian city have reached 5.8 million views in 24 hours. 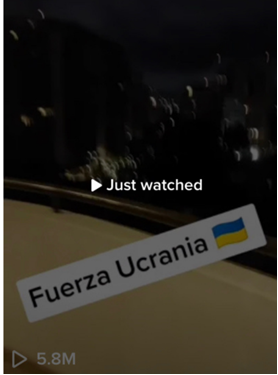 Another tactic being used in information warfare is the misuse of fact-checkers. A website, WarOnFakes, is presented as a fact-checker, but it actually distributes Russian propaganda. The same website is used in a tweet by the Russian Ministry of Defense, introducing “WarOnFakes” as a group of experts and journalists. This shifts the fight to another front, that of the "fact-checkers". A DW article exposes this website and the main conclusion is that there is no information who is behind it, it is not known who are the “fact-checkers” who publish the articles, meanwhile, the use of the website as a source by the Russian media and the Russian government is growing.

WHAT SHOULD BE DONE?

In today's digital world, information warfare is significantly more pronounced. The growth trajectory of disinformation and propaganda circulating on the Internet requires that the skills curve of citizens be raised, in terms of their preparation to analyze and judge any media content, before believing it. COVID-19 and, now, the war in Ukraine, prove once again the necessity that each of us must be very careful where we get the information and that each of us must persistently seek the source of the information. COVID-19 and the War in Ukraine show once again that we should not disseminate any information until we have analyzed it critically and, as long as we have not taken at least three steps, verifying the source of the information, searching for it. the same information in other media, as well as, verification of supporting sources of information.

In all of this, journalists need to be even more attentive and careful to guard against the numerous propaganda and misinformation that are circulating, as well as to contribute to the disclosure of harmful media content. Various world media published manipulated content, falling prey to disinformation, therefore, the focus of journalists should be on news sources and controlling them to avoid the possibility of fraud from manipulated information. Newsrooms, as part of their commitment to filter information, must work on two levels, before placing it in public. The first level is engaging in training journalists on methods and programs that can be used to verify information obtained online, so that, within the newsroom, the number of journalists who can work with programs that help verify photos or videos. The next level consists of increasing the number of editors, to increase care and control over information. These efforts should be an important part of the functioning of newsrooms in our media, to protect the journalistic profession, because, in recent years, we have often seen that the Internet can be a hostile environment for journalists.