The 4Ds Model to Recognize Disinformation

Disinformation techniques are numerous, but all of them can fall into one of those four categories: dismiss, distort, distract, or dismay. Here is the rule of thumb that will help you recognize, predict and prepare to counter disinformation.

The “4Ds Model” is a general pattern that we can observe in lots of different situations when a threat or disinformation actor is being faced with some unfavorable facts, comments or criticism. It was developed by Ben Nimmo from the Atlantic Council’s Digital Forensic Research Lab (DFRLab) on the basis of his experience with the analysis of Russian operations, but this model is not limited to Russian disinformation only. Just take a look at the “4Ds”, and we can guarantee that you will immediately think of some examples from our own life:

DISMISS: If you don’t like what the critics are saying, insult them

This is the simplest and the most common technique deployed. When somebody comes out with news or comments that are unfavorable to the disinformation or threat actors, they will say not to listen to that because… and here some form of insult will follow. There can be many different ways of insulting, for example, by calling somebody crazy or dishonest, or “a foreign agent”. For instance, especially now, in the Russian war context, you can often hear that someone is a “russophobe” and this is why this person is criticizing Russian activities. With this technique, it is important to refute someone’s criticism by undermining their trustworthiness. The goal is to silence the critic and dismiss the opponent’s claims or allegations.

DISTORT: If you don’t like some facts, just twist them

The second technique is based on distorting facts. Simply, if the facts don’t suit the opponent’s story, they make up their own facts. It can be done by replying with “facts” that are not backed up with any proof or reliable sources, using fake photos or videos as “evidence”, but also by distorting the whole narrative, especially historically, trying to cast a different light on some past events, so that they serve the disinformation actor’s agenda.

DISTRACT: If the conversation is getting uncomfortable, change its subject

Once the conversation starts to be focused on something unfavorable, another technique is to change the subject. You can often tell this technique is being used, when you hear: “and what about…?”, as an answer to a piece of criticism. Oftentimes, drawing a false comparison between a critic and the one that is being criticized is used to redirect attention to something else, especially something, that can undermine trust and rephrase the situation. This false comparison can start with “Well, look at what you did in …” and here goes an untimely and unfair example which triggers the critic to refute the accusation or explain the difference between their behavior and the one being criticized. As a result, it redirects them from the original point. The aim here is to distract the opponent from their goal and to create uncertainty, confusion, or even doubts about their credibility.

DISMAY: If you don’t like someone’s plan, scare them off it

Another technique is to intimidate your opponents, embolden the opposition and, ideally, force a change of the original course. It is used by sharing conspiracy theories, ridiculing, or using expressions and metaphors. This is something that is used especially when some decisions need to be made and there is a lot of discussion going on around them. Using dismaying rhetoric, like: “if you decide to go for X, then we would need to reply with Y” - the rhetoric we have been hearing a lot lately. The goal here is to scare people so much that they won’t be willing to follow through with what they’ve been talking about doing.

How can the 4Ds Model be useful to you?

The model presents four standard ways in which disinformation actors will try to respond to criticism. You can use it both to analyze what they are doing and explain to people this is how it works. It also helps you predict what the perpetrators may do next. Once you’ve predicted what they are going to say, you can start thinking about how you can make sure that this disinformation isn’t going to work or be spread.

So, let’s put this model into practice…

Can you recognize these four techniques used in the information war that is taking place just now, especially in the context of the Russian invasion on Ukraine? The same techniques are being used by other disinformation actors. Just take a minute to analyze any given discussion over a divisive topic and you will be able to see the pattern.

Here's a downloadable, graphic summary of the 4D model: 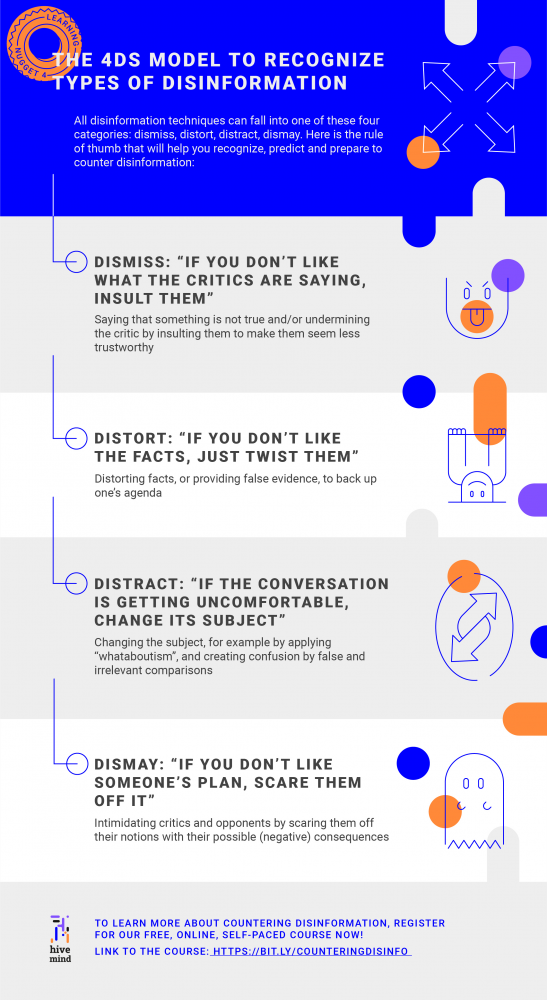