Anti-NATO Disinformation Tactics from the War in Kosovo

“NATO intervention in the Kosovo war was unjustified”. This is the narrative that the Russian and Serbian propaganda has been trying to push forward for many years.

It has been recently used by the Russian president, Vladimir Putin, during his meeting with the German Chancellor, Olaf Scholtz, on February 15th, 2022.

Through various types of content manipulation, the Russian-Serbian propaganda seeks to strengthen their version of interpreting the events from the Kosovo war, back in the year 1999. Looking more closely into the mechanism of creating the anti-NATO biased narrative and the way it has been spread in the media, has become even more relevant now, in the context of similar attempts from Kremlin regarding the war in Ukraine.

The first example, worth mentioning, relates to the NATO intervention in March 1999: a two-year-old Albanian child from Kosovo, who had been killed by the Serbian army, was presented as a victim of NATO bombing in the text published on a Russian website: 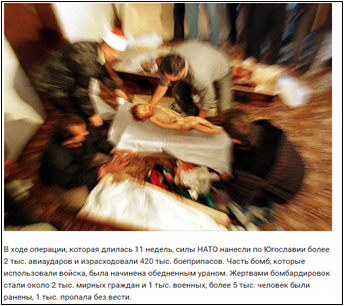 To deconstruct this piece of misinformation, we need to verify the photo using tools such as: ‘Google Lens’, ‘Yandex Images’ or ‘TinEye’.

A quick and easy-to-carry-out analysis reveals that the photo, allegedly of a victim of the 1999 NATO bombing, was in fact taken in 1998 by a Pulitzer Prize winner, Yannis Behrakis, and it actually depicts an Albanian parent, who is putting the body of his child into a coffin. The baby was killed by Serbian forces and was by no means a victim of NATO bombings. 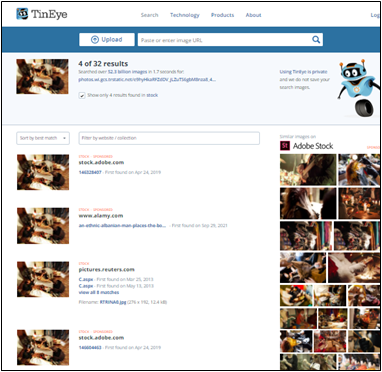 Content manipulation, similar to the one mentioned above, is not carried out exclusively by the media or the Russian diplomacy. Other channels of communication used for disseminating this type of misinformation are social media platforms, as well as some journalists themselves.

This was the case with the second example we are now to present: a contextual manipulation of a photograph of Mr Mustafa Xaja: 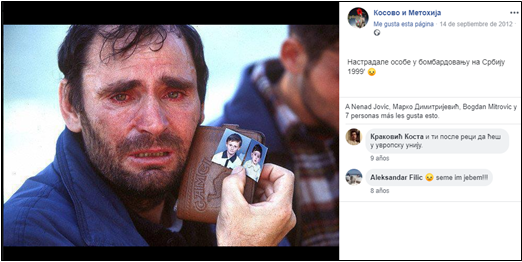 Manipulated photo description reads: “Victims of the bombing of Serbia in 1999”

Initially, in 2012, a Facebook page republished a Reuters photo with the caption: “Victims of the 1999 bombing of Serbia.” The very same picture was used again, two years later, by a Moscow-based writer, Ms Miroshnichenko, on her Vkontakte profile.

However, the truth about this photo is different from what was stated in these two pieces published in the Russian social media channels. “An Albanian, Mr Mustafa Xaja, from the city of Mitrovica in Kosovo, shows photos of his two children who he fears were killed by the Serbs during the war in Kosovo in 1999”, reads the actual caption accompanying the photo published in 1999 by Peter Turnley. Mr Xaja confirmed it himself 22 years later, when interviewed on the morning program on T7.

Similarly to the previous example, the truth about the photograph can be easily discovered with the help of one of the verification tools mentioned above.

The depicted disinformation tactics used by the Russian or Serbian diplomacy can be harmful, or even dangerous, for the state of Kosovo and its international stance. It can cast a shade on the country’s image, particularly in parts of the world, where Kosovo and its history are not very well known. Such was the case with a tweet sent out from the official profile of the Russian Embassy in South Africa, through which misinformation about the Albanian refugee, as a survivor of the alleged NATO bombing, was disseminated.

In the new wave of Russian disinformation, which has erupted after the Russia’s attack on Ukraine in February 2022, the case of Kosovo may resurface again, as part of Kremlin’s wider disinformation efforts. This is why it is of the uttermost importance for the Kosovian institutions to be alert and swiftly react to this kind of false narratives, as soon as they are spotted, to nip them in the bud and prevent their potential harmful effects on the wider, less-politically aware public.

If you want to increase your level of awareness regarding different types of disinformation, take our free, online, self-paced course on "Countering Disinformation":