From trash to activism: how a bodybuilder became Hungary's next green influencer

Blog From trash to activism: how a...

NGOs and activist groups often wish to involve famous people, influencers to their communication to reach a wider audience with their help. However, perhaps even the most open-minded organisations in Hungary would not have thought to ask "Pumped Gabo", originally known for his muscles and senseless partying, to be an ambassador for their cause. A coming of age story or the true face of a previously misunderstood celebrity? We looked at why the bodybuilder-turned-activist’s story works.

Given Greenpeace Hungary's large communications team and international background, it's no surprise that they're good with influencers. They've been able to get well-known people worldwide to support the cause of environmental protection, and they are particularly strong in involving smaller, local celebrities and influencers. Greenpeace Hungary has a long history of campaigns with actors, musicians and other well-known people. But their biggest recent success seems to have come from a celebrity who they themselves would not have expected to be their supporter. "Pumped Gabo", as a new socially sensitive influencer, is one of the big surprises of recent years, bringing a rarely seen link between tabloid celebs and activism in Hungary. Why are so many people touched by his becoming an activist? Is he an activist at all? 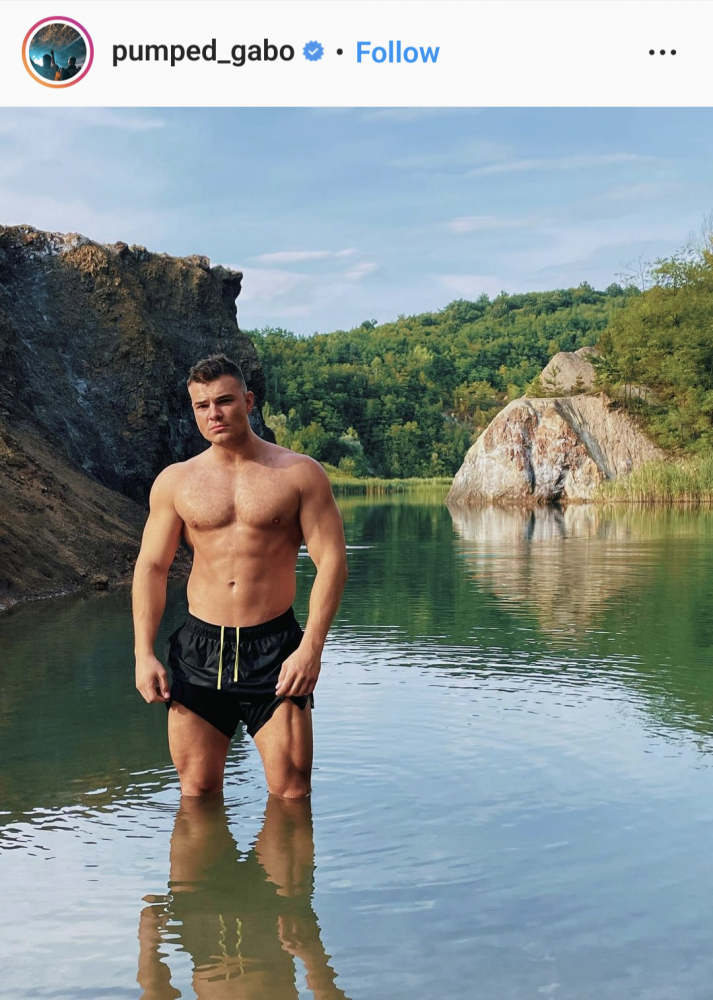 "Gabo", or properly Gábor Szabó, started as a true trash celebrity: he became known after a funny viral video of him dancing at a music festival. He also had a history of erotic acting, later had his own reality show, and starred in multiple commercial TV shows. His focus had been only on parties, girls, and further perfecting his body. However, after seeing a documentary, he started to become interested in climate change and appeared at a Greenpeace event. One thing lead to another, and today, he is an active participant at protests and a regular co-host on Partizán, one of the most popular independent media outlets in Hungary focusing on social and political topics. And he continues to share gym and party content on his social media. Do the two go together? It would seem so.

The video that started Gabo's career - working out and dancing at Balaton Sound.

A celebrity or influencer who stands up for a cause "works" when they are not seen as a paid face, but as a sincere advocate speaking from conviction, someone with integrity. "Pumped Gabo"s voice is completely his own: when he speaks out for the environment, he immediately brings up his favourite festival and the message hits home. After all, who wouldn't want to party at Balaton Sound instead of being stuck on a planet made uninhabitable by a climate crisis? In his own style, he appears in a non-expert role, not replicating texts written by others (or seemingly written by others). For example, on the occasion of teachers' protesting their wages, he took part by simply stating, "More dough for teachers!”. And if he is working with an organisation, he does not repeat their script - he does not introduce Greenpeace as an independent, international activist organisation, but simply describes them as "pretty dope guys". In addition to his authenticity, he is also open to self-reflection, which is why the public image of Pumped Gabo has developed into a more serious character: in a personal interview he spoke frankly about how he was manipulated when he was on TV, how he was taken advantage of, what mistakes he made.

Using a sixpack for protecting our waters

As he continues to owe his success and popularity to his workout, it is not surprising that (semi-)nude posing has become one of his trademarks in his social appearances. He sees this as a means of raising awareness, and it is undeniable that his standing up for Lake Fertő got everyone's attention: it also brought huge (unpaid) press coverage to Greenpeace and the cause. Moreover, his authenticity also helps to ensure that he cannot be accused of bias, political backhandedness or being someone’s paid agent - an accusation many NGOs and activists have to face in Hungary currently. He has remained a transparent, partying celebrity. A guy who occasionally takes on environmental issues between two protein shakes, and although he wouldn't skip leg day for a climate protest, activism suits him, so he speaks out on other issues. 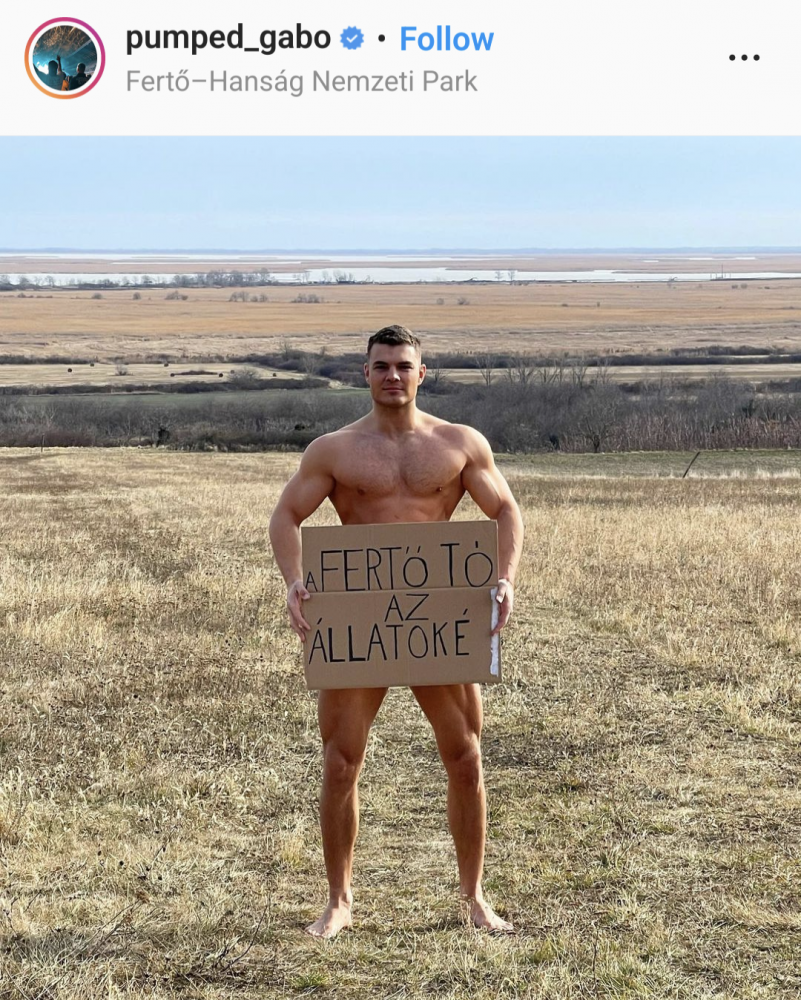 text on the banner: Lake Fertő belongs to the animals

It is likely that some people active in the NGO sphere, despite the impact they have made, still tend to frown on the activities of "Gabo" and celebrities like him. Yet they are role models for many, and especially for many young people. The glamour and money they represent are alluring, they are a sign of success. His tone is very different from what we usually see from activists, and his fans might not really find the usual communication of social, environmental and other civic issues appealing. So when "Gabo" told them in an Instagram story how David Attenborough's documentary made him feel between two workouts, and why it turned him towards environmentalism, he got the message of action on climate change across to people who might not have been reached by NGOs or activist movements before. And these newly engaged followers will not necessarily scroll on with that momentum, but will even go to a demonstration for "Gabo". And they are needed to bring about change.

Are these two worlds really so far apart? Is "Gabo" really so different from other activists? The ordinary person who, through a personal encounter, an experience, or even a movie, realises how big a problem is and wants to act - pretty much every person active in the civic sector has these moments that make them committed to a cause. Just as we all look for ways to act and try to use our own strengths to help the cause. What Gábor contributes by using his perfectly honed body and follower base is the same as another activist's graphic design skills who creates posters, or someone else’s organisational skills and precision in the background work. So instead of frowning upon, Gabo and his content are worth paying attention to if you're wondering how a completely unexpected, outsider influencer can make a big splash and give a cause wider visibility. 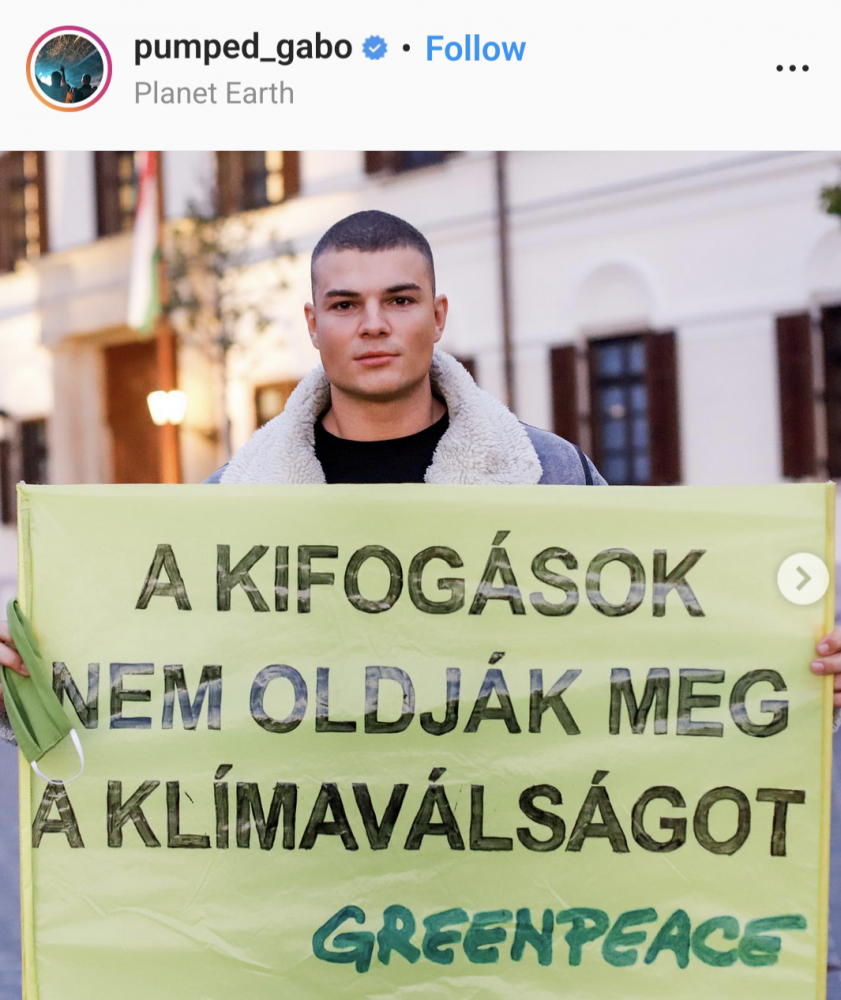 text on the banner: Excuses won't solve the climate crisis