Blog The 6 Most Popular Traps Our O...

When you need to make an unbiased, rational decision about something important, try to be aware of your cognitive biases. They are a normal phenomenon in psychology of all humans, but as they may affect your judgement or decisions, it is worth acknowledging their existence and learning some methods of how to overcome their misleading effects.

Processing of information depends on your prior experience, upbringing and the community you grew up in; your political views, religious beliefs, and so on. We are flooded with information from millions of sources throughout the day, that’s why your brain creates shortcuts meant to cut down on the time it takes for you to process information. The automatic ranking systems we use aren’t always objective though.

A cognitive bias is a flaw in your reasoning that leads you to misinterpret information from the world around you and to come to an inaccurate conclusion. Researchers have catalogued over 175 cognitive biases!

Here are some examples of the most popular ones that we all tend to fall for:

It suggests that people with lower competence in a given area are more likely to unknowingly overestimate their competence, while high performers often have a tendency to underestimate their skills and knowledge. If you are an expert in a given field, you understand how complex it is. But if you are far from being an expert, you don't understand the limitations of your knowledge.

The Dunning-Kruger effect does not reflect low intelligence, but rather a lack of insight, experience, or reflection on our own abilities.

Here are some tips that may help you to overcome it:

The bandwagon effect refers to the tendency people have to adopt a certain behavior, style, or attitude simply because everyone else is doing it. The impact of bandwagon trends is often relatively harmless, such as: in fashion, music, or pop culture. However, when certain ideas begin to take hold, for example, particular attitudes toward health issues, the bandwagon beliefs can have serious and damaging consequences.

That’s why you should question everything, even the most common opinions, and conduct your own research or find a credible source of information.

For example, people who support or oppose a particular issue will not only seek information to support it, they will also interpret news stories in a way that upholds their existing ideas. People are especially likely to process information to support their own beliefs when the issue is highly important or self-relevant.

To deal with the confirmation bias remember to stay open for other perspectives:

The name refers to the Swedish manufacturer and furniture retailer, IKEA, which sells many items of furniture that require assembly. It states that we tend to overvalue things that we have partially created. Feeling like we’re incapable of doing something increases our desire to prove ourselves and appear competent, leading us to inflate the value of the things we have actually made.

Some strategies to avoid the IKEA effect are as follows:

The Actor-Observer bias is based on the difference between how we explain other people’s actions and how we explain our own. People tend to say that another person did something because of their personality or some other internal factor. By contrast, we usually attribute our own actions to some external factors, like the circumstances we were in at the time of the event.

There are several things that you can do to avoid falling for this kind of bias:

These biases teach us that we should think twice before making up our mind about something or someone.

There are many other popular examples of biases that were not mentioned in this article, for instance: the Halo effect, the Anchoring bias, or the Attentional bias. 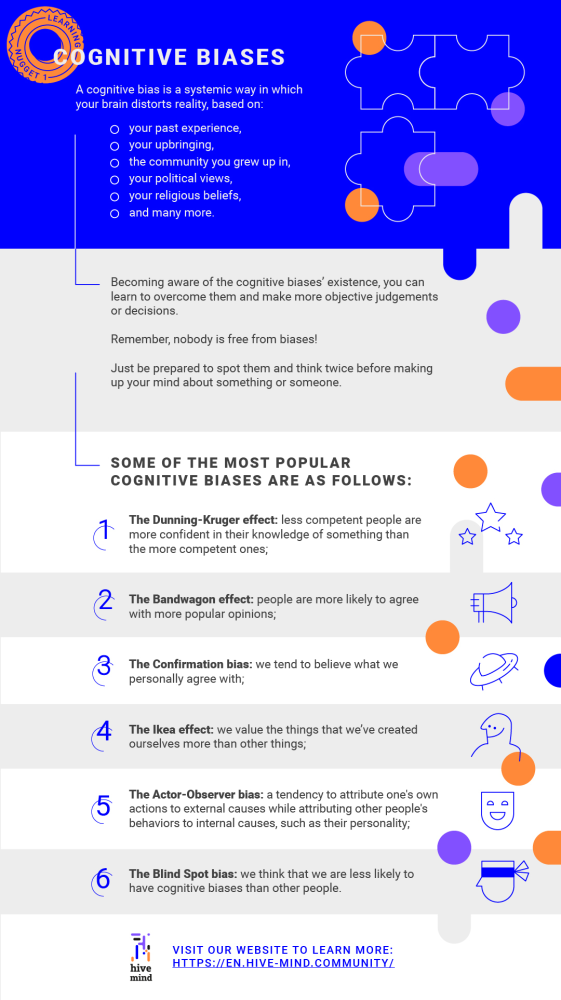