Not Only “Fakes”: Popular Types of Misinformation

Blog Not Only “Fakes”: Popular Type...

Digital revolution has greatly enhanced public vulnerability to manipulation by information. The trend is growing with every year and the term ‘fake news’ doesn’t cover all of its forms anymore. Find out what are the most common information disorders we encounter daily.

Different types of information disorders can be categorized according to their content and intention they are created with. It is crucial to read the message carefully and double check facts. Higher awareness of the popular types of misinformation can help you protect yourself from the influence of information manipulation.

A piece of information becomes misinformation, malinformation, disinformation or fake news by different ways of treating and serving it to the audience. It is a complex system with a very wide spectrum of cases: from a satire or clickbait content to imposter or intentionally fabricated content. Here are a few examples most popular in the media or social media today:

« A satire or a parody: e.g., memes. This type includes creating fake content for fun. The challenge in this age of information disorder is that satire is used strategically to bypass fact-checkers and to distribute rumors and conspiracies, knowing that any criticism can be dismissed by stating that it was never meant to be taken seriously;

« False connection: the most common form is clickbait, sensational headlines that don't reflect the content properly;

« Misleading content: content reframed by the media, or used just in its part which leads to false conclusions;

« False context: usually visuals put in other context than the original one, to discredit someone or something (our advice here: google the images included in the piece of news!);

« Imposter content: fake social media accounts or websites that mimic the design of credible news media, such as: the BBC;

« Manipulated content: the source piece of content shared is genuine, but some of its aspects are altered to fool people, by the use of, .e.g., Photoshop, or other tools to change the original content (this kind of practice creates, for instance, an unrealistic image of women in the media);

« Fabricated content: created from scratch, with the intent to deceive. Use of official intelligence of deepfakes has made this type of content hyper realistic and very dangerous: you can, for example, create a video where a president of a country declares war against another country.

Sometimes manipulated and fabricated content is impossible to spot just by looking at it.

To be better prepared for such occasions, you may use the same tools that can help you identify fakes, eg., https://deepware.ai/... 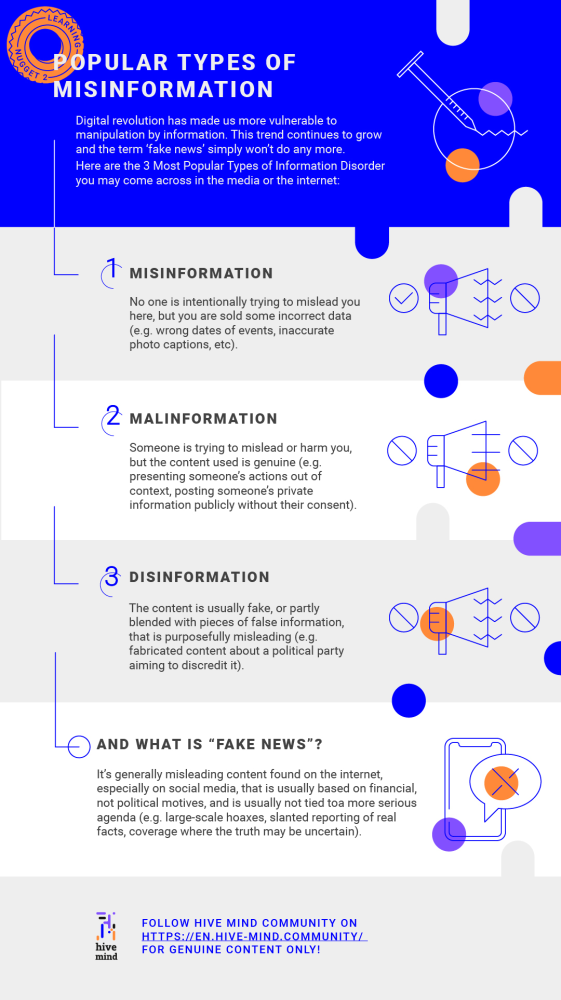